Artworks   |   Susanna and the Elders 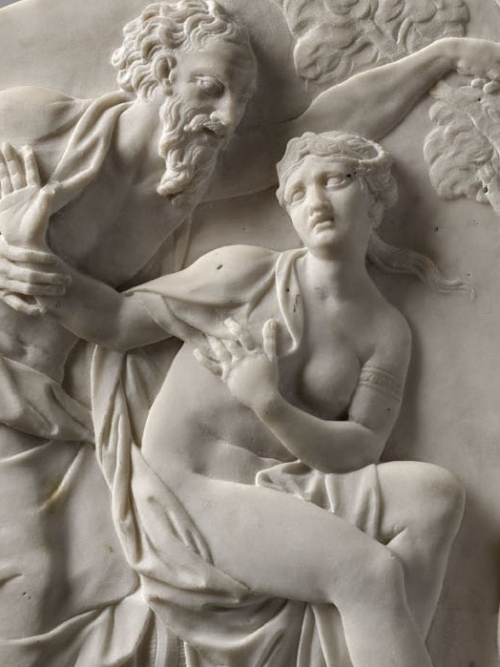 Susanna and the Elders

Article XIII of the 1664 statutes of the Académie Royal française decreed that the reception piece in the category of sculpture should be a marble low relief on which was carved a story that depicted one of the three favoured typologies: medallions of a religious nature, allegorical scenes relating to the Academy and allegorical scenes honouring Louis XIV, under whose supervision, together with that of the painter Charles Le Brun, the institution's activity took place.

The present work must have been created for this very purpose, presenting a theme from the Old Testament which was well-suited to the academic context on account of the moralising overtones of the subject and the possibilities it offered for representing the nude.

The two male characters traditonally represented in the semblance of elderly men as violently they shake and threaten Susanna, throwing themselves upon her, are here shown at the woman's side, in grandlioquent poses and with the features of ancient philosophers, their faces with satyresque traits, clothed in light, fluttering tunics that allow the torsos to be seen, more in keeping with the heroes of classical antiquity than the old Jewish men of the biblical account. The story is carved in extremely low relief - one of the expressive techniques, together with drawing, forming the basis of the academic teaching - with a clear preference for the the decorative effects dictated by the sophisticated, subtle articulation of the clothing, the composure and two-dimensionality of the bodies that stand out in the immediate foreground against an extremely rarified and perfectly smooth background, creating the effect of a print or engraving.

The work reflects perfectly the taste for sculpture, within French academic circles, produced during the last quarter of the seventeenth century and the beginning of the eighteenth, a mixture of Baroque exuberance and significant quotations from the Antique, of which perhaps now the finest exponent can be seen in François Girardon and the artists belonging to his circle. The reliefs executed by the sculptor for the great vases of the Musée du Louvre around 1683 constitute the most appropriate cultural references for the contextualisation of the present relief of Susanna and the Elders, both in the analogous and aforementioned preference for a two-dimensional narration, and in the similar treatment of the drapery, with its thin, paper-like folds.