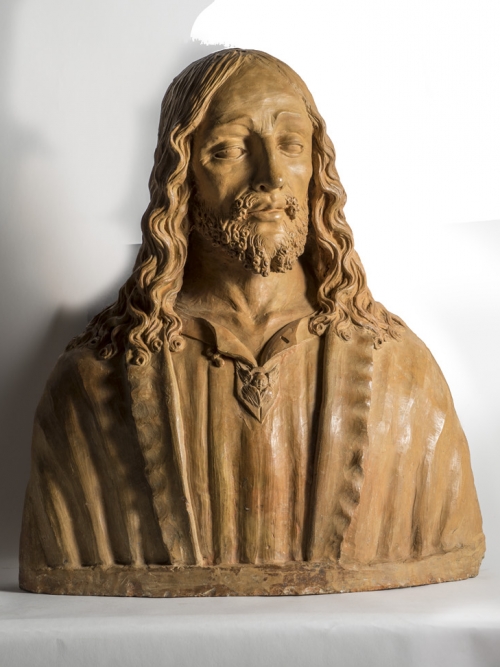 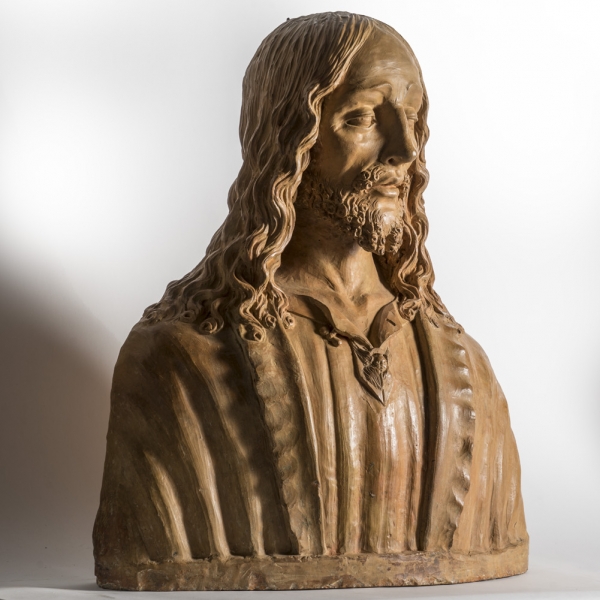 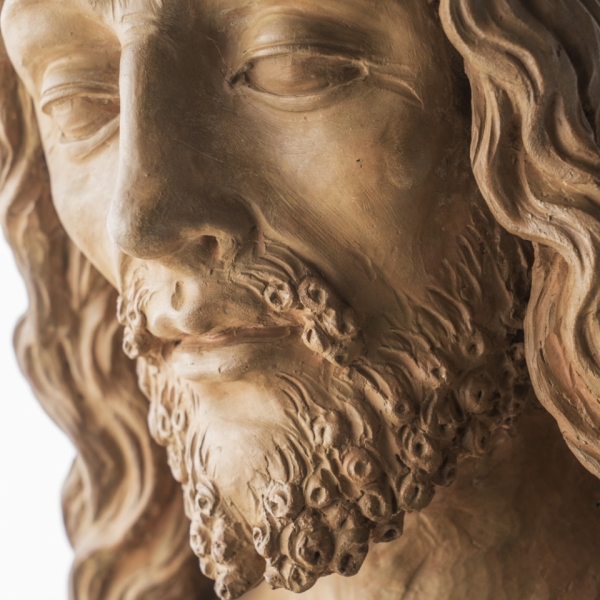 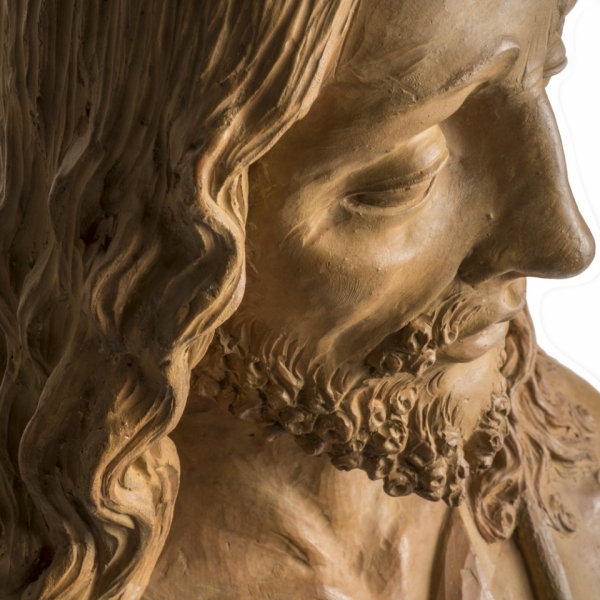 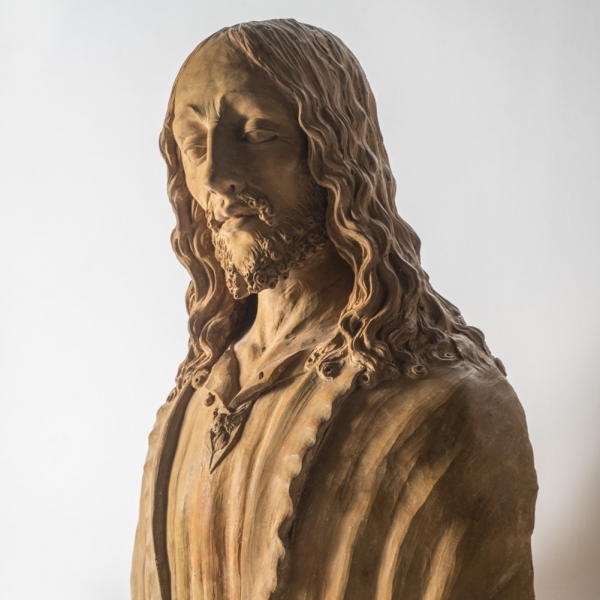 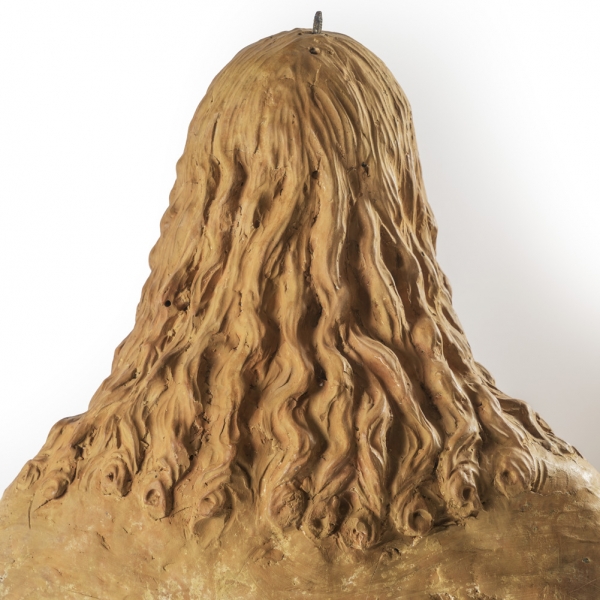 The Redeemer appears vital and thoughtful, in a robe fashioned from simply virtuous, wavy ripples to create a mantle.  The vital naturalism of the subject is astonishing, fuelling the strong vitalistic naturalism of the subject, the fineness of the camisole embellished with embroidery of a cherub and open upon the chest, which seems to be feeling the weight of the curious button pulling on the flap of fabric in contrast to the part where the slot is free and more light.  Similar details of realistic narrative in the rest of the characteristics are reflected in the features and vivid physiognomy of Christ, not hoisted in a frontal pose, but looking back to his left with a mild expression.  The facial features have an exceptional quality of modelling, standing for the interpretation of the sinuous, flowing locks, combine with the meticulous details of the snails of the beard and the sensitive anatomical workings of the face, nose and eyes.  All of these peculiarities have remained thanks to good preservation which must have characterised the history of this terracotta, showing no significant restoration work, except for some small spots of the head where, as often happens.
Such an introspective interpretation of Jesus, which leaves no room for the slightest expressionism, can only be the product of the fervent atmosphere of Savonarolan spiritual reformation in Florence and its immediate post; the moment when the preacher proclaimed: Jesus, Ling of Florence” as the foundation of the government of the new Republic.  This was according to an idea, however, that was subsequently reinforced in 1529 with the epigraph “Jesus Christus Rex Florentini Populi S. P. Decreto Electus” upon the entrance of the Palazzo della Signoria.
It was precisely this sort of civic devotion that fuelled the production of similar subjects in marble, terracotta and sometimes plaster mould.
Works by the masters of sculpture of the time, such as Lorenzo di Credi, Benedetto da Maiano, Leonardo del Tasso, Andrea and Jacopo Sansovino, Andrea Ferrucci, Torrigiano, Baccio da Montelupo, Agnolo di Polo, the Della Robbia and the Buglioni, all created works according to these models.  Yet, the most beautiful head of the Redeemer was that of Andrea del Verrocchio in the famous group of the Doubting of St Thomas (1467-1483), intended for one of the niches for the Church of Orsanmichele.
Loyalty to a common pattern often makes it difficult to distinguish the hands of the creators for many busts of the Redeemer, but the work in examination here, has a creatively free autonomy that differs in several respects from the models of Verrocchio.  It emerges in its strong dimension with a more tender and sweet interpretation of plastic features, as well as a modelled fluidity in its hairstyle.  These are details which, added to the type of clothes and the more compact choice of drapery, allows the viewer to include this bust in a fairly consistent group of specimens which are less well known than the Verrocchio.  These include the work in the Klewer Collection in Berlin (Passavant 1968, p. 214, n. 16), the terracotta in the Museo Nazionale di San Matteo in Pisa, another in the Loeser collection and, lastly, that in the Church of San Silvestro a Barberino of the Mugello – possibly a work by Agnolo di Polo.  Confirming the attribution of this work is another example, which recently passed through the market and, thanks to the study by Giancarlo Gentilini was attributed to Benedetto Buglioni (Cat. Pandolfini Auction, Florence, 18 October 2012, lot 45, pp. 52-53).  It was Gentilini who also made the attribution of this bust to the same artist.
It is the extensive glazing that sets these works apart, making the other works paradoxically more vivid in their realism, with an inescapably strong tangency between the plastic of the two busts.  There are affinities ranging from technical aspects, such as the masterful technique to the interpretation of details such as the hair, features, beard snails, pupils, the defined cherub and the ornamented embroidery of the dress.  In addition, the small moulding gives the bust stability, a typically stylistic element of Benedetto, which allows us to relate the bust to that of the Saint John the Baptist of Kaiser Wilhelm Museum of Krefeld.  With regards to the outlined anatomical consonances there is just the need to compare this bust with others by Buglioni.  These include the two altars in the Museo della Collegiata ing Empoli, where in addition to the facial features certain details can also be found such as the button that unites the Christ’s mantle, a detail which can also be seen in the Immaculate Conception, or the Madonna and Child with Saints in the Rijksmuseum in Amsterdam, where the Saint Jerome has a similarly naturalistic face.  These three works which fall between the first and second decade of the century, thus leading us to date the bust in the same period.